News About Archive What's a Riftclaw? 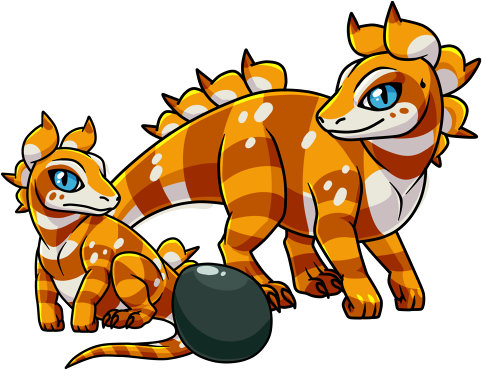 To make a long story short, a riftclaw is a horse-sized, dinosaur-like creature that is naturalised to the lightless void that exists between worlds. Riftclaws are magical creatures like dragons or unicorns, highly attuned to and imbued with the energies of the void. Their namesake claws are capable of digging into the very fabric of reality, allowing them to slip between worlds or into the void itself at will.

While being well-suited to life in the lightless expanse of ruined and decaying worlds that make up the topography of the void, riftclaws really don't like to live there. It's dark, cold, and extremely dangerous- and while they're quite capable fighters, they'd really prefer to live and raise their children in a safer environment. Thus the majority of riftclaws are found in various corners of the multiverse, keeping to themselves and trying to live as peacefully and non-intrusively as possible.

Despite appearances, riftclaws are sapient people- they are capable of speech and higher reasoning, and often use their shapeshifting abilities to live among other sapient peoples, like humans or anthropomorphic species.

What's the story behind the name Voidfra.me?

The void is a null dimension filled with the decaying husks of "fallen" worlds. A frame is a riftclaw term for a collection of worlds/universes belonging to the same "canon"- worlds that are linked by shared aspects and "closer" to each other in the web of connections riftclaws can see. While technically the void is a single dimension that surrounds/is below reality, it's also the framing device for the site, thus the name.

If riftclaws are people, doesn't that make it weird that we're adopting them?

That's why you're a "caretaker" and not an "owner". Think of it as taking care of them until they can find their families again. Or even making a new one with them. Riftclaws are pretty cool with that.